The 2014 new dirt bikes are worth looking at if you’ve been considering replacing your current worn out and beat up bike. To help you decide which make and model might be right for you, we’re going to take a look at the top new dirt bikes. 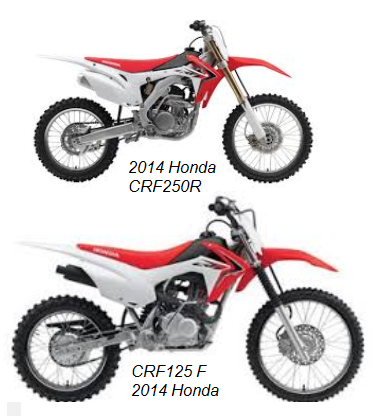 This resemblance has to do with the design of the 250F frame which now carries the engine much lower, automatically lowering the center of gravity.

Changes you won’t notice visually but may notice in performance have to do with a new dual-stage fuel injector, new head porting, and a higher compression piston. Additionally, the linkage ratio is new as are the swingarm and rear shock. The 250F still has a standard fork with a coil spring in each leg although it now has “new settings”.

This year Honda introduced two new versions of the CRF125F with features like two different wheel sizes and an electric-start engine. This model also features a brand-new chassis and aggressive new styling, as well as an increased engine displacement and user-friendly powerband. Additionally, the upgraded front and rear suspension system allows optimum performance.

Along with the exciting addition of the new electric-start single cylinder OHC four-stroke engine, which is tuned for low-end power and ample pull through the powerband, there is a four-speed gearbox in the new CRF125Fs.

Recently Husqvarna introduced 10 new models, primarily for the U.S. market, all as a result of collaboration between Husqvarna, KTM and Husaberg. These 2014 new dirt bikes include: 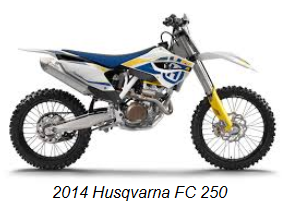 2.    FC 450 – basically a KTM with its polyamide subframe and handguards, as well as a closed-cartridge WP for, a Renthal 827 Fatbar handlebar, and Dunlop MX51 tires.

3.    FE 250 – a four-stroke endure model with Keihin electronic fuel injection, a DDS clutch, and a 42mm throttle body, as well as the damping duties are handled by the WP’s 4CS fork and the linkage rear suspension.

4.    FE 250 – feature a DPHC engine and a stock radiator fan, a high-pressure cast case and a California green sticker homologation.

5.    FE 501 – similar to the FE 250 and FE 350 bikes, this has the largest displacement engine with a Konig bridged box-type piston in the single overhead cam. Includes a radiator cooling fan, a Brembo hydraulic clutch, and a spark-arrestor.

6.    TC 85 – a two-strike similar to KTM’s 85 SX it doesn’t have the polyamide subframe, but does have a six-speed gearbox, a hydraulic clutch and black Excel rims.

8.    TC 250 – resembling a KTM 250 but with a plastic subframe, this bike also features a WP closed-cartridge fork, Boyesen reeds, and a WP linkage shock.

10. TE 300 – like the TE 250 it also sports a Brembo hydraulic clutch, a six-speed transmission and Boyesen intake components. 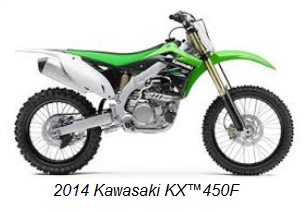 KX™250F – with a type 2 SHOWA Separate Function Fork with preload adjustability and a separate spring and damping function, an oversized petal-style front braking rotor, and adjustable handlebar and foot pegs.

Like Kawasaki, by October 2014 Suzuki has introduced their newest bikes for their 2015 lines. These include the DR-Z125L and the DR-Z70: 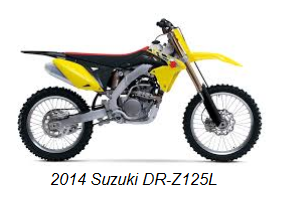 Have your say about what you just read! Leave me a comment in the box below.

The 2014 new dirt bikes Yamaha introduced suitable for off-roading are: 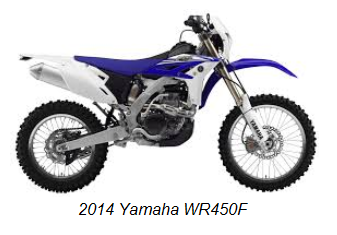 4.    TT-R110E – With an 110cc, four-stroke engine and a four-speed gearbox plus push-button electric start this bike is perfect for all ages.

5.    TT-R50 – Features a push-button electric starter, an inverted front fork, and a three-speed automatic transmission, plus a Monocross rear suspension.

6.    PW50 – Think of “PW” as peewee, because with a seat height of just 19.1 inches, a fully automatic transmission and an adjustable throttle this is the perfect first ride for kids.

Of course, we’ve only been able to scratch the surface of the many features and improvements found in the 2014 new dirt bikes. However, whether you’ve been off-roading it for years or are looking for the perfect dirt bike for your kids, you can rest assured that 2014 was a vintage year.

All images are copyrighted by their respective owners.