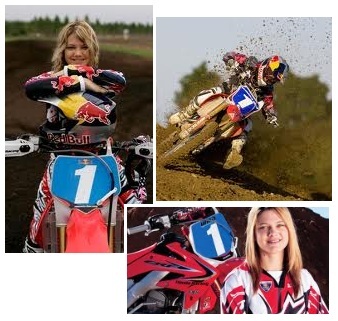 Ashley Fiolek MX rider was born on the 22nd October in 1990 in Michigan. Since birth, she has been deaf.

It has not slowed her down in any way, though. She also happens to possibly be the best female motocross racer throughout the world.

When she was a child, she would often sit on the front of her dad's bike or her mom's 4- wheeler. They would ride through the woods near her grandpa's house for hours on end.

When she was about three, she was given a Yamaha PW50 from her parents. This is a bike that is suitable for a very young rider. It wasn't often used by her, though, as she wasn't happy with the training wheels.

Weighing in at 107 lbs and standing at just 5' and 2 ‘', Ashley Fiolek MX rider is a true racing sensation. She has blazed the trail for other female motocrossers. She has claimed a Red Bull Racing factory Honda ride and is the 1st female motocrosser to do so in the USA.

She has claimed two WMX/AMA titles (in 2008 and 2009)during her 1st two professional seasons and snagged the XG Gold in 2009 in the Women's Super X. Ashley feels the vibrations of her bike. This tells her when she has to shift gears.

Ashley began to race at the age of seven. When she was sixteen, she met up with Pro motocross riders such as Travis Pastrana. Racing with the number plate 67, Ashley was the WMA Pro National champ in 2008. This was after Ashley's first pro win at WMA Pro National Hangtown. During the 2009 season, she won more races including Glen Helen (both motos) and at Hangtown (Moto 1).

At Steel City Raceway, Ashley finished in seventh place on 5th September, 2009 in a lot of pain due to a fractured collarbone from a spill in the race. In April of 2010, Ashley published her 1st book called ‘Kicking Up Dirt' which was co-written with a journalist called Caroline Ryder. 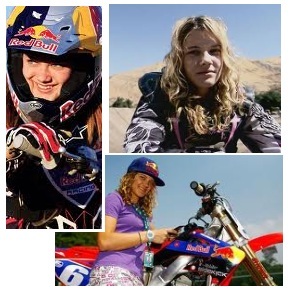 In April of 2010 Ashley was featured in a Red Bull commercial. Ashley is the 6th athlete that has been sponsored by this company to appear in their commercials.

Xtremey Award for the Most Inspirational Athlete

AMA Youth Motocrosser of the Year

AMA Youth Rider of the Year

Ashley was honored at the Courage in Sports Awards in 2010